TELUS is a Vancouver-based telecommunications company that offers a full range of wireline and wireless services. Its operations are focused on the western Canadian provinces and eastern Québec, and generate revenues in excess of C$13b per year. Over the years, the company has grown mostly through free cash flow (FCF) reinvestment rather than from mergers and acquisitions (M&A), unlike its large-cap peers.

We expect TELUS's EBITDA growth to surpass that of its peers in 2017, given its superior trends in subscriber metrics. TELUS forecasts EBITDA growth in the 3.0–6.0% range in 2017, vs 1.5–2.5% for BCE and 2.0–4.0% for Rogers. There are several reasons for this. First, the economic situation in Alberta (where TELUS has a significant proportion of its operations) has improved recently. Second, the company is also benefiting from an overall healthy wireless market in Canada due to favourable demographics. Third, it continues to have a competitive advantage in its wireline footprint because of the high quality of its growing fibre network. Finally, the company reports an industry-leading wireless churn, which is a good proxy for overall customer satisfaction. These factors more than offset the current pressure on the legacy home phone business, as the company is able to sell wireless services to substitute for traditional phone services.

While we expect TELUS to pay ~125% of its FCF in dividends in 2017, we believe the payout should head back below 100% in 2018 despite the company's plans to grow its dividend by 7–10% through 2019, which is unmatched among large caps. The tighter cash flow situation is due to its current capital-intensive fibre-to-the-home deployment. This top-quality network will be useful for delivering wireline service over a larger footprint and also to backhaul the wireless operations in order to meet the ever-increasing demand for data. Net debt to EBITDA currently stands at 2.8x—a manageable ratio that we expect will remain stable throughout our forecast horizon. Moreover, we would argue that compared with peers, TELUS's capital expenditure spending is not as high as commonly believed by the market once spectrum acquisitions and M&A are considered; in our view, these factors must be taken into account when evaluating a firm's total investments.

TELUS posted a strong wireless performance in the most recent quarter, which should support future profitability. We also note that it is one of the few companies in Canada that is actually reporting revenue growth in its wireline division. TELUS trades at a 0.4x discount vs its Canadian telecom peers on an EV/FY2 EBITDA basis, despite its industry-leading EBITDA and dividend growth. We believe such a discount is unwarranted given the company's strong underlying fundamentals. At current levels, TELUS's shares offer an attractive dividend yield of 4.6%. Our valuation for TELUS is based on the average of two techniques (discounted cash flow and net asset value), which generates our target price of C$49.50. 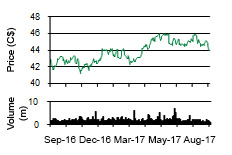