After a buoyant 2017 worldwide, the stars fell out of alignment in 2018, particularly in the second half of the year. Clouds have also gathered on the horizon for 2019. The word “recession” has even reappeared in some economic commentary. Is a recession really in store for a number of countries?

What Does It Take for a Recession to Occur?

The commonly used definition of recession is when real GDP declines for at least two quarters. Economic growth must therefore actually shrink, not simply slow down, as it is doing right now.

Depending on the country, real GDP is not the only variable used to identify reversals in the economic cycle. In the United States, the National Bureau of Economic Research (NBER) generally uses four variables to determine economic cycle highs and lows more accurately. These variables are employment, industrial production, business sales and personal income less transfers.

At present, the four variables used by the NBER do not point to a reversal in the U.S. economic cycle (graph 1). To confirm the start of a recession, a widespread, sufficiently persistent weakness in these variables would need to be observed. In 2015–2016, industrial production contracted, but the other variables were less gloomy and so a recession was not declared. Employment continued to rise at a good pace, personal income less transfers sat stagnant for a number of months but did not decrease, and business sales growth only slowed. We could see a similar scenario in the coming quarters. That would not be enough to officially declare a recession, but it would still be characteristic of an economy with slowing growth. 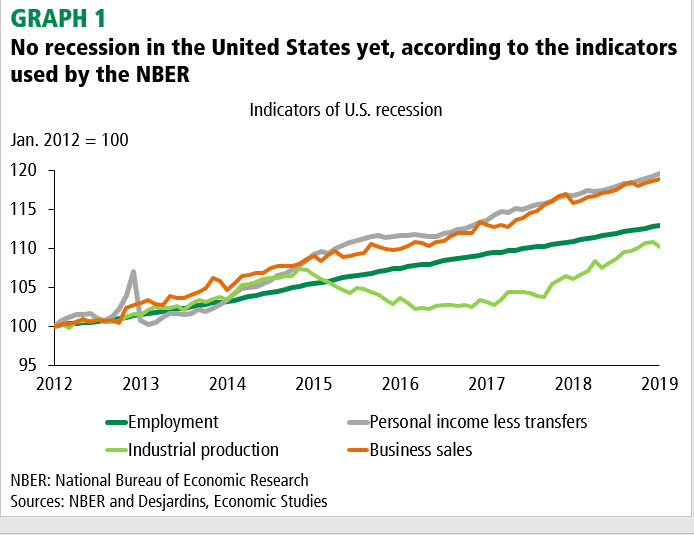 A Number of Risks Loom on the Horizon

Economic growth slowed in a number of countries in 2018, and the danger is that the trend could intensify in 2019. Slowing was strongest in Europe, with Italy now officially in recession (graph 2). Most of the indicators published since the start of the year do not point to any short-term rebound in growth in Europe. The situation does not seem to be poised to improve much more quickly in the United States, or in Canada. To make things even more complicated, a number of risks are looming on the horizon. 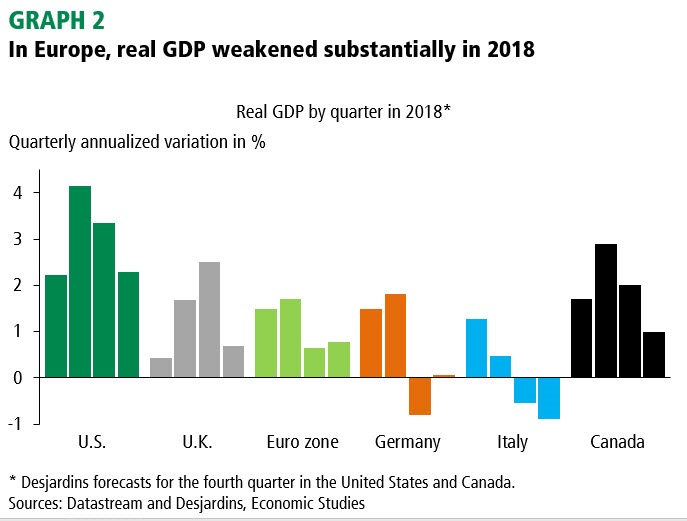 Among the potential problems that could worsen the global economic situation is U.S. protectionism. The Trump administration ordered a number of new customs tariffs in 2018, and the countries they apply to have generally retaliated. Further tariffs could be added in 2019, which would lead to another round of reprisals and bog down global trade further.

The growing political uncertainty is another major risk. This makes the economic climate less conducive to investment. Households may become more hesitant about making major purchases. Governments could also feel the effect and thus have a harder time implementing reforms or carrying out projects that could be good for the economy. Political uncertainty appears to be running particularly high in Europe, with the United Kingdom’s future in the European Union still unclear, but also in light of the yellow vest crisis in France, the fragile coalition between the League and the Five Star Movement in Italy, and the rise in popularity of the far right in Germany.

A potential resurgence of volatility in the financial markets is another major risk to the economy, as it could further sap consumer and business confidence. The stock market rebounds seen since the start of the year primarily seem to be based on the fact that a number of central banks have halted monetary tightening, and on hope surrounding trade negotiations between China and the United States.

What about the Age of the Cycle?

Time is likely starting to take a toll on the economic cycle. It has been close to ten years since the last U.S. recession ended. If growth continues until June, the 1991–2001 record for the longest cycle will be tied at 120 months.

However, the current cycle differed from previous ones in that the recovery took longer to take root, among other things. When the economy began to grow again in the summer of 2009, it took two years for the GDP to get back to its pre-recession level. It also took a long time to absorb the excess production capacity. This is achieved when real GDP outstrips potential output. The potential output level is a sort of long-term real GDP trend where production factors such as labour and capital are deemed fully used.

Once potential GDP is surpassed, the economic cycle can be said to be maturing. This period lasts approximately three years on average. Since real GDP in the United States surpassed its potential in the spring of 2018, it means that the current cycle could run until early 2021 (graph 3). Nevertheless, this analysis has a healthy margin for error. Real GDP did not really have time to surpass its potential before the 2008–2009 recession began. 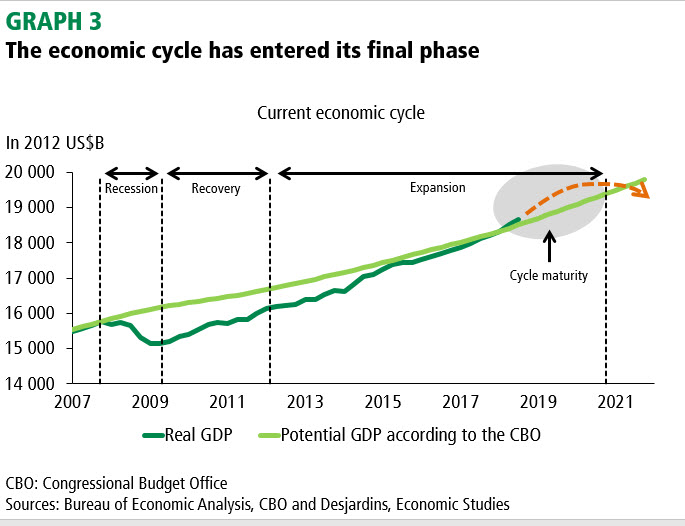 In Other Words, Although It Is Too Early to Be Talking about a Recession, Caution Is in Order

During this time of anxiety and uncertainty, the current economic slowdown might give the impression that a recession is on the way. That said, it still seems too early to infer such an outcome with a high degree of certainty. Economic growth did slow in a number of countries in 2018, and the horizon looks gloomier. At the same time, we must also consider that the pause in monetary policy tightening will give the economy a boost. Moreover, the U.S. economy could still surprise us, as the job market statistics remain very good. Combined with a possible ongoing rebound by the stock markets, which would contribute a positive wealth effect and support confidence, U.S. consumption could finally step up in 2019. This would be good news for the world's economy, and especially for Canada’s.

That said, we should not be putting on our rose-coloured glasses and asserting that the cycle will never end. We have entered the final phase of the U.S. cycle. It could still last another several quarters, but the margin for error is large. Forthcoming economic data will most certainly be very closely scrutinized, and analyses will have to pay particular attention to pockets of weakness that could snowball.