In the United States, the debt of non-financial businesses has reached a historic high of 74% of GDP. It’s a situation that bears an uncomfortable resemblance to the Great Recession of 2008–2009, when household debt reached problematic levels. Do we now need to start worrying about the consequences of high corporate debt? The picture looks even worse in some other countries, as debt levels are higher in France, Canada, Japan and the United Kingdom (graph 1). Among emerging markets, China stands out with corporate debt coming in at 155% of GDP. However, many Chinese businesses have close ties to the government, which makes comparisons with other countries more difficult. 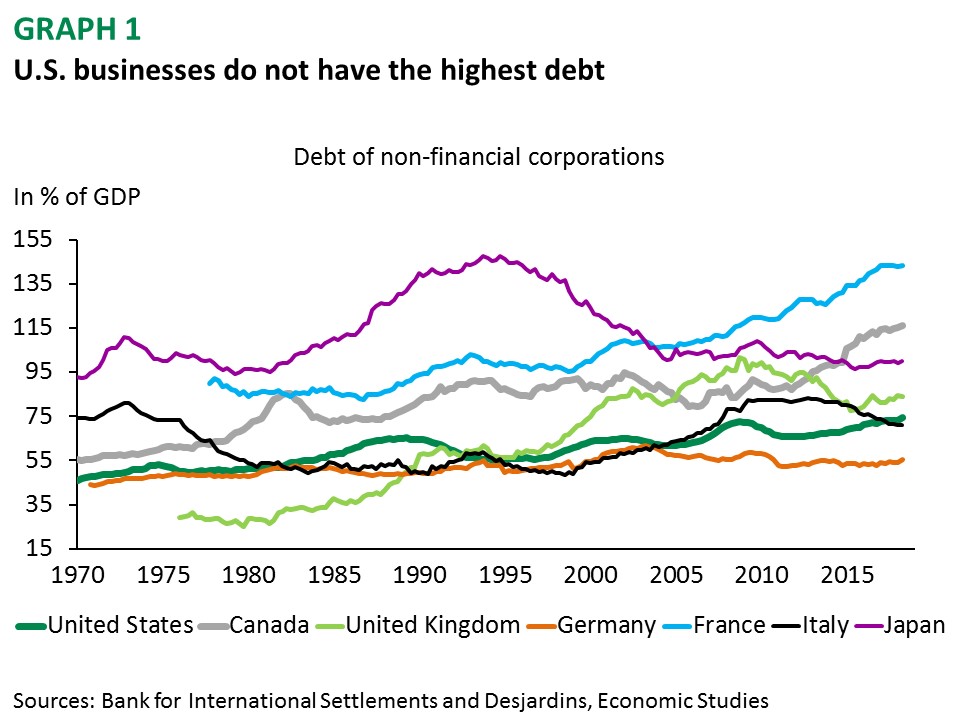 The size of a debt doesn’t necessarily tell you how expensive it is. The ratio of debt service to business revenues provides a better indicator of this. Canada’s debt service coverage ratio is currently the highest of all G7 countries. However, debt service isn’t the highest it’s even been for Canadian businesses, since interest rates remain low. 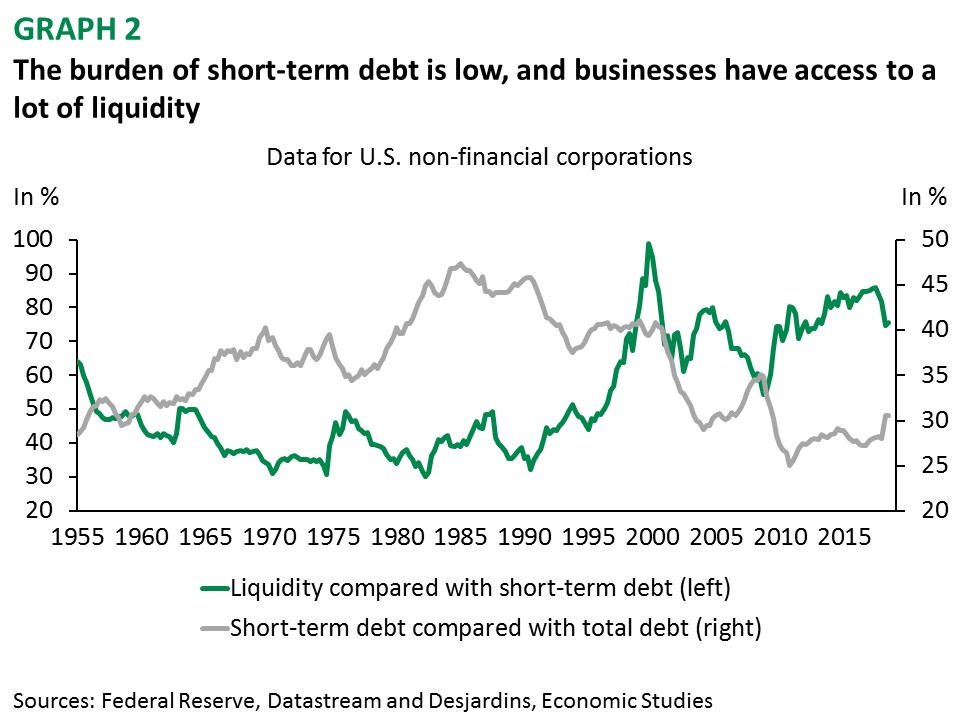 The central banks have not given any indication that the pace of their interest rate hikes would be anything but gradual and slow. Even if they do raise rates quickly, it wouldn’t automatically be reflected in business costs, or at least not entirely. Businesses appear to have taken advantage of low, long-term interest rates to extend the maturity date of their debts. For example, the ratio of short-term debt to total business debt in the United States is only about 30% (graph 2). Moreover, businesses appear to have a great deal of liquidity, which could be used to alleviate potential financing difficulties.

Don’t forget: Debt can be good

More debt normally means more investment in things such as additional production capacity or new technologies. The economy usually stands to benefit from these investments, which also add to a business’s assets.

However, it’s likely that some corporate debt was used to finance mergers and acquisitions, which don’t necessarily affect economic growth. Debt can also be issued to finance share buybacks, another transaction that does not directly affect the economy. Nevertheless, the money investors receive for redeeming their shares can be reallocated to other uses and contribute positively to the economy.

In general, alarm bells began ringing in the fall because of the type of corporate debt in advanced countries, especially in the United States and Europe. The Bank for International Settlements published an analysis of the rise in the number of zombie companies and the increase in the number of leveraged loans[ 1 ]. Zombie companies are businesses that don’t generate enough revenue to be able to service their debt over an extended period of time. There are six times as many of them today as there were some 30 years ago.

Leveraged loans can be grouped into various categories, including collateralized loan obligations (CLOs) and covenant-lite loans, which offer lenders fewer protections. Leveraged loans are generally granted to businesses already saddled with a lot of debt or a poor credit score, thereby making the loans riskier.

Analyzing debt as a whole

The total debt burden has continued to increase since the Great Recession. A closer look indicates that government debt is responsible for this progression in advanced countries, not business debt (graph 3). During the Great Recession of 2008–2009, many governments responded to the slowdown in demand by introducing major stimulus plans. After the crisis, governments had to continue to provide some support, especially in countries where households had reduced their debt load and consequently their contribution to economic growth. Against this backdrop, a return of business investment and an increase in corporate debt that would allow governments to ease off the gas pedal a little was almost desirable. It wouldn’t have been any better either if household debt were to climb again and create the same imbalances that were at the heart of the Great Recession of 2008–2009.

A decrease in total debt would reduce the threat of economic and financial instability over the medium and long terms. While concerns have recently been raised over corporate debt, it would not be good to see this debt go down right now. The economy needs investment and innovation to support growth, which would not be compatible with a reduction of corporate debt.

On the other hand, this is no reason to underestimate the risks and focus excessively on certain types of financial assets, such as leveraged loans. Furthermore, there would be no advantage to increasing the number of zombie companies as they are often less productive. Caution is therefore in order. In a perfect world, financial resources are allocated efficiently to many businesses, but not to those that cannot generate enough revenue over the long term. Good businesses successfully create value by using their debt productively.