Is the global economy losing steam? Many observers are wondering. It is clear that concerns about the economy’s health are up from last year. The combined real GDP of member countries of the Organisation for Economic Co operation and Development (OECD) reflected an average annual change of 2.8% in the second half of 2017, and sat at 2.4% in summer 2018—though the projected continued growth of the American economy and the recent drop in oil prices are expected to temper the impact in 2019. The slowdown could, however, become more marked beginning in 2020. Global real GDP is expected to dip from 3.8% growth in 2018 to 3.7% in 2019 and 3.4% in 2020 (Figure 1). 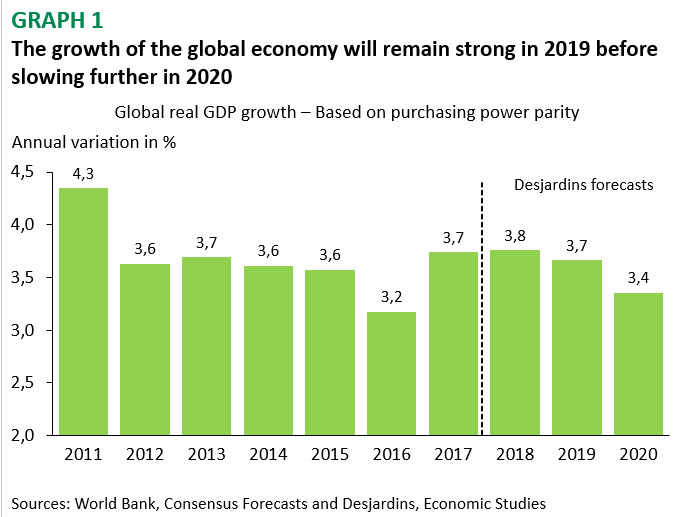 Since early 2018, several economic indicators in the eurozone have deteriorated. But disaster has not yet struck, and the continued confidence of both households and businesses suggests that economic growth will continue, though the slower pace recorded by the GDP in recent quarters will as well. Political tensions in the eurozone, however, are amplifying economic hardships in some countries. After achieving 2.5% growth in 2017, the real GDP of the eurozone is projected to increase by 1.9% in 2018, 1.8% in 2019 and 1.6% in 2020.

Brexit continues to colour the British economic climate and, at the time of writing, an exit strategy has yet to be determined, since the agreement negotiated between the May government and the European Union has been stalled in Parliament. The risk of a Brexit without an agreement in place therefore remains high.

The S&P 500 has plunged more than 10% since the beginning of October, eliciting concerns about the health of the American economy. However, there is little evidence relative to the real economy to support such fears. The ISM Manufacturing and Non-Manufacturing Indices rose in November, suggesting strong growth for current production, investment and the economy in general. In addition, household confidence remains very high in the wake of recent cyclical peaks. Growth is expected to remain strong in 2019, provided that certain weaker aspects of the economy bounce back soon, including on the investment front. Observers are also expected to monitor the toll of the Trump administration’s protectionist policies. Overall, our forecast is that real GDP growth will hold steady at 2.9% for 2018 and 2.7% for 2019, and then decrease to 2.0% in 2020.

It’s been a busy few weeks for the Canadian economy. Among the positive developments, the North American Free Trade Agreement (NAFTA) was replaced by the Canada-United States-Mexico Agreement (CUSMA), the Canadian government introduced tax measures aimed at promoting business investment, and a massive natural gas project was announced in British Columbia. The job market also smashed two historic records: strongest monthly job creation and lowest unemployment rate since 1976. On the other hand, domestic demand was anemic in the third quarter (Figure 2), and the energy sector struggled with unfavourable conditions. All of these elements impact growth forecasts for the Canadian economy. On the whole, these adverse effects could win out in the short term, to the extent that our projection for 2019 was revised downward, from 2.1% to 1.8%. Growth of 1.7% is expected in 2020.

Turning our attention to capital markets, volatility remains. Investor concerns were fuelled by disappointing international numbers, tensions over trade between China and the United States, and tumbling oil prices—the price of West Texas Intermediate (WTI) fell to around US$50 per barrel. Perceptions of a gloomy outlook for economic growth and inflation put significant downward pressure on bond rates. The Bank of Canada (BoC) maintained the status quo in December and highlighted in its press release several downside risks faced by the economy. The BoC’s change of tone coupled with less-favourable short-term predictions for the Canadian economy suggest that monetary policy will not be tightened again before spring 2019, though two hikes in Canadian policy interest rates are planned for next year. The American economic outlook remains favourable, and we are banking on three hikes in US benchmark interest rates in 2019. The Federal Reserve could, however, halt policy tightening a little earlier than previously anticipated. Investor fears and recent slides experienced by the stock market, bond rates and oil prices appear to be exaggerated, and a robust recovery should be seen in the coming months, helping the loonie regain some recently lost ground. 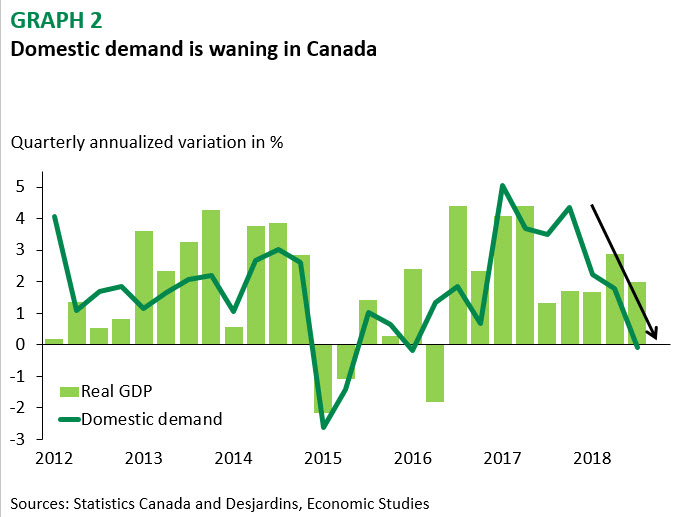