Based in Montréal, Québec, Transat is an integrated international tour operator and one of the largest in North America with ~5,000 employees. The company develops holiday travel packages for sun destinations and Europe. Through its airline subsidiary, Transat served 2.1m passengers in 2016, making it the second-largest player on the transatlantic and sun destinations market in terms of capacity. Transat operates direct flights to 35 sun destinations and 27 European cities, with departures from 19 Canadian airports. The company reported total revenues of C$2.9b in 2016.

The outlook appears positive for the 4th quarter of fiscal year 2017 (4Q FY17)—ending October 31—as well as for the upcoming winter. Management recently mentioned that pricing on the transatlantic market (main driver of 4Q results) so far was up 3.2% year-over-year. Transat expects its adjusted operating income in 4Q FY17 to be similar to that of 4Q FY15 (C$70.8m), which represents a significant improvement over last year.

With respect to the upcoming winter, industry capacity for sun destinations is up 7% compared with 8% for Transat. While it is too early to draw any conclusions at this point, the Canadian dollar appreciation is expected to have a significant positive impact as Transat incurs a significant portion of its costs in US dollars. In the aftermath of the hurricanes, operations appear to be under control and management does not anticipate a material impact on its financial results. In fact, it expects hotels to be ready for the high season which starts in mid-December.

As part of its 2015–17 strategic plan, management is well underway to achieve C$100m of cost reductions and margin improvements by the end of FY17. It also recently announced the signing of a 7-year agreement with Thomas Cook Group Airlines to share aircraft on a seasonable basis. This should allow Air Transat to manage and utilize its fleet more efficiently; the fleet will eventually consist solely of Airbus aircraft (A321s and A330s). Over the last year, management has been successful in unlocking significant value through the sale of French and Greek assets for C$93m and the sale of its minority interest in Ocean Hotels for C$188m. A new strategic plan for 2018–20 will be released during winter 2018, and we are confident that further value will be created for shareholders. 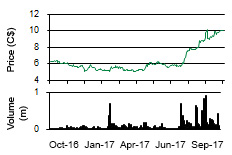