CN is the second largest publicly traded North American railway and a backbone of the Canadian economy. It has a network of ~20,000 route miles spanning Canada and mid-America which connect North America to global markets on three coasts, and which offer product, geographic and customer diversity. The company employs ~25,000 people and handles more than C$250b of goods per year.

In tandem with overall economic performance, industry fundamentals remain robust despite concerns over a trade war. The economic indicators we monitor have continued to point to strong market conditions. US industrial production shows a strong correlation with carloads, and the outlook has been revised upward over the last twelve months (from 2.4% to 3.6% for 2018 and from 2.1% to 2.7% for 2019 on a year-over-year basis), supporting our bullish view on the economy.

At the company level, we highlight that CN's metrics are recovering nicely following a harsh winter and that its infrastructure investments are starting to pay off. Volume in the second quarter of fiscal year 2018 (2Q18) was up 7.6% year-over-year, beating our initial forecast of +0.9%, which has resulted in stronger operating metrics. We therefore recently revised our 2Q18 adjusted fully diluted EPS to C$1.41, up from C$1.31, and believe that CN's 2018 guidance (C$5.10–5.25) is poised for an upward revision in the coming months. Moreover, interim president & CEO JJ Ruest has done an outstanding job since his appointment in March 2018, in our view, and remains highly committed to making the necessary investments to restore fluidity on the network (capital expenditure envelope of C$3.4b in 2018 includes some 29 major infrastructure capacity projects). In view of his solid performance, we believe he will likely be promoted to the permanent CEO position, which should be well-received by the market.

Taking a closer look at CN's volume, we note that this is up in all commodities except automotive (which represents only 6% of total revenues). We expect volume growth to accelerate in the back half of the year, as CN will gradually be facing an easier comparison. Upcoming investment in port infrastructure (Prince Rupert, Vancouver and Montréal) should continue to fuel intermodal growth (25% of total revenues) in the long term and, despite the current concerns cited above, we foresee a bullish outlook for crude-by-rail, grain, metals & minerals (including frac sand) and coal. Given the strong volumes expected, combined with a lack of capacity in the truckload industry, we expect core pricing to strengthen above the 2.5–3.0% (year-over-year basis) targeted range. Recall that core pricing improved sequentially from 2.4% to 2.7% in 1Q18, with contract renewals averaging about +5% yoy.

Our target price of C$118 is derived from an average of three valuation methods, and we expect the stock to trade above historical averages in light of the company's strong fundamentals, impressive growth opportunities and robust balance sheet. 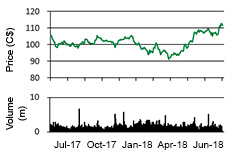