CAE is a global leader in training for the civil aviation, defence and security, and healthcare markets. The company is well-established around the globe with over 8,500 employees, 160 sites and training locations in more than 35 countries. CAE has a diversified business base with a high degree of recurring revenue (60% services vs 40% products; 36% from the US, 28% from Europe and 35% from other markets, including Canada; based on FY17 revenue).

The outlook for civil aviation (58% of FY17 revenue) remains solid, with utilization rates near record levels. This trend is expected to continue on the back of strong commercial traffic, improving bizjet activity and a pilot shortage, with ~255,000 new airline pilots needed over the next 10 years.

Fundamentals for the defence industry (38% of FY17 revenue) are also strong on the back of an increase in defence spending in major markets as well as the trend toward outsourcing training solutions. Most recently, President Trump called on other members of NATO to increase military spending, which supports our bullish stance on the sector.

As for healthcare, the introduction of the new Juno platform negatively impacted profitability in 1Q FY18. However, we expect brighter days ahead given Juno is a dedicated platform for nursing education, the largest addressable market in the healthcare education market. Looking forward, increasing volumes will be the main driver of operating leverage and we remain confident that CAE can sustain double-digit revenue growth for this segment.

We also expect the reshaping of the Asia portfolio to unlock value for shareholders. CAE recently announced the sale of its interest in its partnership with China Southern Airlines (which included an exclusivity agreement) for US$96m. Going forward, CAE will continue to provide training services to China Southern, but will now have the ability to expand its scope in Asia. CAE has already started looking into new partnerships and has announced an agreement for pilot training with Singapore Airlines; it has also acquired the remaining stake in its partnership with AirAsia. Overall, we are pleased with this new form of cash deployment as it will enable CAE to further increase its footprint in the growing Asian market.

Our target price of C$25 is derived from an average of three valuation methods. In our view, CAE's valuation is compelling as the stock is trading at an EV/EBITDA multiple of 9.1x (based on FY19 forecast), well below the average of 13.0x for the top 5 US peers. The acquisition of Rockwell Collins by United Technologies implies a 14x EV/EBITDA multiple on 2018 consensus, which provides a positive read-through for CAE. 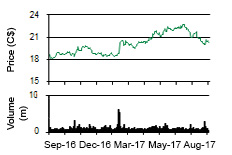